Upland Game Birds: From the drumming Dusky (Blue) Grouse in the Frank Church Wilderness to Chucker and Hungarian Partridge in the Owyhee canyonlands, to turkeys in the Panhandle, Idaho has it all. California Quail cover the Snake River Plain. Ringneck Pheasants abound in the farmland. Spruce Grouse hide in high alpine meadows and Western Ruffed Grouse flush in brushy creek bottoms. Sharptail grouse habitat can be seen from Grand Teton and Sage Grouse get lost in the sagebrush sea of the Owyhee’s.

Waterfowl: Let’s be honest, Idaho has not embraced the outfitting industry for waterfowl but that is changing! Idaho allows outfitting on private property but there are very few licensed outfitters on public land. If you know the general area where you will be vacationing, a local fishing or big game outfitter may be able to help you.

Rocky Mountain Elk: Elk are probably the most sought-after species in Idaho. Whether you want to hunt from a tent camp in the wilderness or enjoy the comforts of a lodge, Idaho has it! Most hunts use horses and mules but there are a few outfitters who use ATVs and pickups. The best thing about hiring an outfitter in Idaho is elk tags can be guaranteed. Each outfitter has an allocation of elk tags for his/her clients. Most other western states do not have access to elk tags like Idaho does.

Mule Deer: Idaho has long been known for its’ large herds of Mule Deer. Mule Deer in Idaho can be found mostly in the lower half of the state. From the deserts of Southern Idaho to the highest peaks in the Frank Church, old, mature Mule Deer bucks can be found. Most Mule Deer archery seasons open for the month of September. Typically, October is the timeframe for most rifle Mule Deer seasons. Idaho even has a few seasons where Mule Deer can be hunted in the rut in November. Couple these long seasons with the opportunity to get a guaranteed tag from an outfitter and I think you will agree, Idaho has it all.

Whitetail Deer: Whitetail deer can be found almost everywhere in Idaho but they are most prevalent in the northern half of the State. Idaho is one of the few places where you can hire an outfitter and hunt a remote wilderness that sees very few other hunters. Because we have so many deer and so much of our state is accessible only by horseback, Whitetail bucks have the ability to grow old. If a heavy horned trophy is what you are looking for, the Clearwater Region and Panhandle hold your Whitetail Deer dreams. Whitetail tags are guaranteed for clients of outfitters in Idaho.

Pronghorn: Antelope in Idaho are mainly in the southern part of the state. Rifle antelope tags are controlled by a lottery system. Archery tags are available in some hunts and in the lottery system in others. Visit with your outfitter about these hunts.

Mountain Lion: Mountain lions in Idaho are very prevalent and in some wilderness areas, hunters are allowed two tags. Your best chance of connecting with a big cat is to hunt in the winter months when there is snow on the ground. Most hunting for lions is done with dogs and it helps to find a cat’s track in the snow before you turn the hounds loose. By finding the track before letting the dogs loose, you accomplish two things. First, you can make sure the lion is not a female with kittens. Idaho does not allow a female with kittens to be harvested. The second thing you can see is whether you are turning loose on an old, mature tom. Ideally, you want to harvest the oldest animal you can. By looking at the cat’s track in the snow, you can usually tell whether it is a large cat or small one. By only harvesting the oldest animals and reducing the female harvest, Idaho has been able to keep a long season with no controlled hunts.

Black Bear: Idaho has the most liberal seasons on Black Bears of any other state. We can bait, spot and stalk and run hounds both spring and fall. Some remote areas allow a hunter two tags. Most bear seasons open the middle of April and close in June most open back up late August and close in October or November. Most bear hunting in Idaho have guaranteed tags. Some bears in remote wilderness areas have reached over 30 years of age. These bears receive very little pressure. Baiting and hound hunting bears allows a hunter time to judge the bear. Idaho does not allow a hunter to harvest a sow with cubs. When the bear is on the bait or in a tree, it gives the hunter time to make sure it is a legal bear.

Wolf: Wolves in Idaho were introduced in January of 1996. Since that time, wolves have proliferated to the point of saturation. In fact, it is difficult to keep the number of wolves in check compared to the number of ungulates (prey base). Whereas bears and lions have one or two young every other year, wolves have multiple pups each year. Because of this, Idaho has allowed non-resident hunters to buy wolf tags at a reduced rate and some places, you can hunt wolves year-round. Nothing will make the hair stand up on your neck like howling with a pack of wolves.

Shiras Moose: Idaho’s moose populations have decreased in the northern half of the state due to an overabundance of wolves but they are still holding steady in Southeast Idaho. Moose are on a lottery draw.

Mountain Goat: Idaho’s mountain goat populations seem to be holding stable. Most mountain goats in Idaho can be found in Central Idaho. Mountain Goats are on a lottery draw and Idaho only allows a hunter to harvest one in a lifetime. 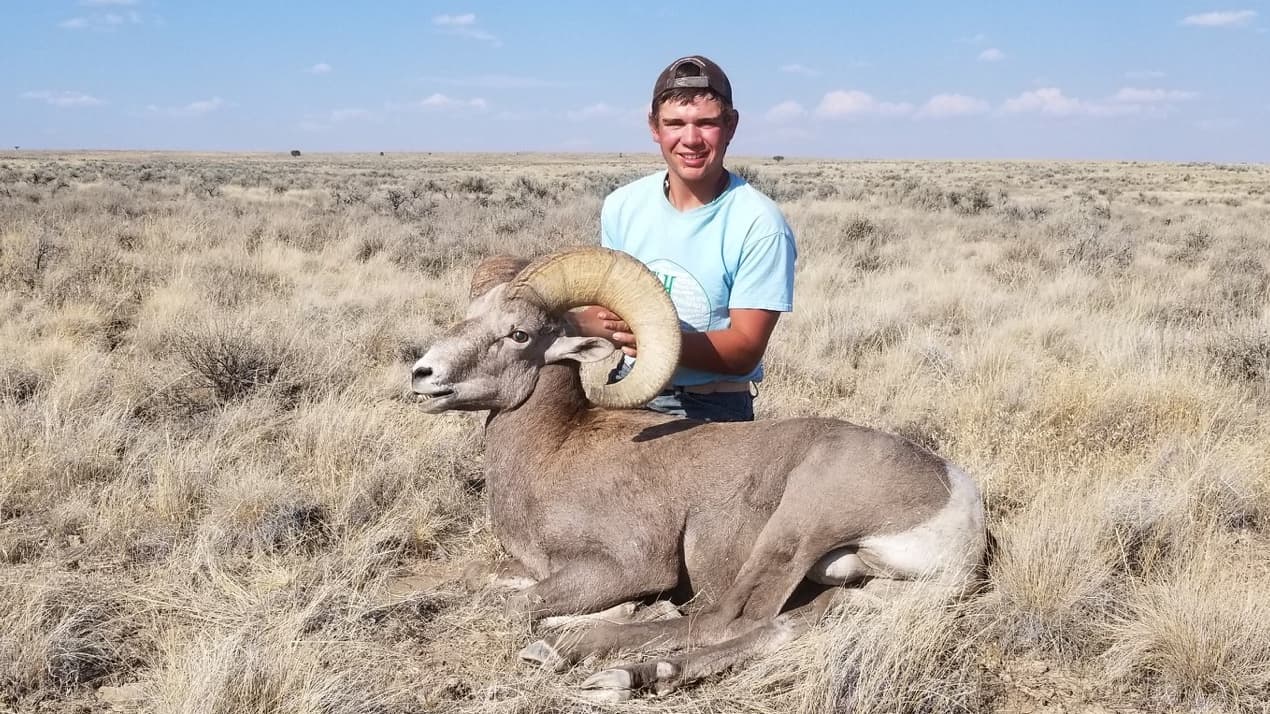 Rocky Mountain Bighorn Sheep: Most Bighorn Sheep can be found in Central Idaho hanging out in the most rugged country you can find. The seasons for Bighorn sheep are typically in September and October. A Rocky Mountain Bighorn is probably one of the most coveted trophies Idaho has to offer. Because of the high demand and relatively low number of tags, it takes some hunters many years just to draw the tag.